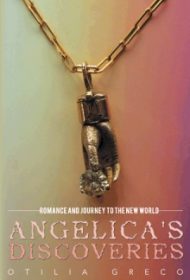 Otilia Greco’s novel follows a young woman, Angelica, from childhood into an adulthood in which she travels through much of Europe and America.

Angelica is fascinated by a family heirloom and the mystery of its origin. As she grows into a young woman who loves to travel, she journeys through Europe and America. Along the way, she uncovers a few secrets connected to the heirloom.

Greco’s biography at book’s end details her own love of travel, and Angelica’s Discoveries is undoubtedly a tribute to her passion. Unfortunately, as a novel, the story lacks forward momentum and cohesion. There’s no driving force behind Angelica’s travels. The narrative drifts from one place to the next, offering no conflict beyond a few snafus in travel plans. The family mystery is neither compelling nor present for most of the novel, appearing only briefly near the end.

Additionally, Angelica’s passivity makes her a difficult character to embrace. At one point, a male admirer frightens her so badly that she flees to a different hotel. Yet, when the same man climbs into her window, she does nothing and continues to see him socially. She also occasionally thinks of a former boyfriend, who hasn’t contacted her for years. When this man suddenly reappears in her life, there’s no emotional growth for readers to experience alongside Angelica. Instead, Angelica marries him, and the story continues without consequence.

There are also some problematic racial stereotypes, specifically the passages dealing with Native Americans. For example, Greco repeatedly describes Native American characters as having a “red face,” calling them “scary and impressive.” On another note, a scene involving a Native American “Fire Festival” is highly romanticized and puzzling, offering no explanation as to why Angelica is invited to a ritual that the native characters claim is intensely private.

The issues mentioned quickly add up to reader frustration. Despite the author’s love for travel, Angelica’s Discoveries is largely an uninspiring journey.