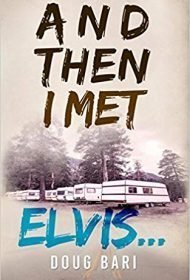 In And then I met Elvis, Doug Bari presents the gritty coming-of-age story of Tim, a 13-year-old living with his alcoholic mother in a trailer park in Glen Cove, New York, in 1969.

From the first page, Bari illustrates in uncompromising terms the challenges Tim faces in life. Of his mother, he says, “I always knew that things were going unavoidably south when she told me she loved me.” In graphic terms, he describes how she drinks until she vomits and expects Tim to clean up after her. Tim knows she is on a really bad bender when she says she loves him.

Things are no better at the school Tim begins attending only two weeks before summer vacation. He’s quickly singled out as a welfare kid and becomes a target for three bullies.

Despite Tim’s desperate circumstances, the novel is in many ways optimistic and upbeat. Tim finds a friend in Darrell, another new boy in the trailer park who he nicknames Elvis. He babysits for and develops a crush on a young mother and bonds over ’60s’ music with a pizza shop owner. There is hope Tim will beat the bullies and survive his teenage experimentation with alcohol and sex relatively unscathed.

Sharp writing and biting wit make this a fast-paced read. Introducing Moosie, Tim’s enemy at school, for example, Bari writes, “Moosie was the ringleader. A true bully. Tiny for his age. But there were storms in this guy’s eyes.” Bari brings his teenage protagonist vividly to life and Tim’s candor gives the novel the feel of popular memoirs about extreme poverty such as Angela’s Ashes or The Glass Castle.

Readers should be aware that the story tackles difficult issues, including abuse, neglect, sexual assault, and pornography. Although the ending is somewhat frustrating, leaving unanswered questions around what happens to Elvis, readers open to an unvarnished coming of age narrative will find themselves keenly interested to see how Tim survives the summer of ’69.