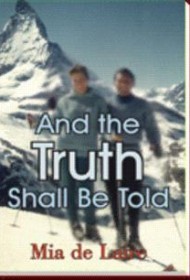 With apologies to vegetarians, Mia de Laire’s And the Truth Shall Be Told is like a cut of good meat with too much fat. There’s a lot of flavor, but it takes time to get to the beef. The author tells a compelling story of espionage and love that begins in the 1950s and spans five decades; the problem is, simply, too much detail.

Peter Landon is a playboy and a CIA agent ordered to marry before setting out on his first assignment. He meets Lara, then quickly weds her, in New York City. From there it’s a passport-stamping marathon to numerous cities throughout Africa and Europe. What keeps the reader engaged is curiosity: what is Peter up to, and will Lara ever find out? Initially, Peter is a scoundrel who eventually comes to love Lara. She is intelligent, but allows Peter to dictate her life. The real problems for the couple take shape after Peter agrees to become a double agent.

Two-thirds of the way through, the novel takes a turn and Lara emerges as a strong-willed woman determined to find the truth about Peter. This involves numerous visits with government agencies, politicians and even psychics. Telling far more than it needs to, de Laire’s narrative includes extensive details about nannies, designer clothing and hotel accommodations. This is unfortunate, as the plot is strong enough without weighing it down with extraneous minutiae.

Such detail includes inconsistencies and errors, such as when Lara meets a man who invites her to a Stanley Cup game in December. Most hockey fans refer to the Stanley Cup only for playoff games, which occur in late spring. The game, like other superfluous details, isn’t crucial to moving the story forward.

The novel ends with a typographically large question mark. This leaves the door open for de Laire to write a sequel. If she does, she would be wise to trim it of any excesses.