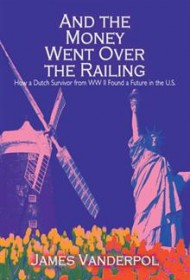 James Vanderpol, considered an “undesirable Jew,” was one of untold thousands in the Netherlands whose lives were impacted during the Nazi occupation in World War II. For nearly five years, the teenager fought to avoid capture and death, hiding in the chimney of a Christian family’s home during the many raids and surviving near war’s end by ingesting only horse and dog meat, tulip bulbs and rotten potatoes.

James’s father Joshua (called Joe) was a wholesale diamond merchant and out of the country when the occupation began; he was not allowed back in. He moved to the United States and it was there James and his brother (unnamed) settled after the war. James enrolled in college, earned an accounting degree and, through his intelligence and fateful opportunities, embarked upon a rewarding and adventurous business career and a life of volunteerism.

Despite Vanderpol’s dramatic start in life, he devotes just 28 pages of his autobiography to his harrowing experiences and relates what he considers terrifying events with flat emotions. For example, in a story about the Gestapo cutting through floors with a bayonet to find hiding places, he notes that in one case, one of four people hiding was hit. “The others quickly put their hand on the victim’s mouth so he could not scream. However, they had to wait too long for the Gestapo to leave, and they had to watch the man bleed to death.”

Despite the lack of literary flourish, the book is generally well written, with occasional repetition of details and a few misspellings (“champaign” for “champagne,” “deserts” for “desserts”). While Vanderpol has clearly lived an accomplished life, his memoir lacks emotional strength because the author rarely offers introspection or reflects back on how his early experiences ultimately impacted his future endeavors. Nevertheless, it is likely to appeal to those who enjoy reading success stories of U.S. immigrants.