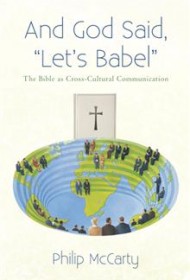 How can contemporary readers understand the Bible, a book that was written by dozens of authors over 15 centuries? Theologian and Bible teacher Philip McCarty sets out to convince readers “that the Bible was not just for certain cultures or periods of time,” but is for all people in all cultures, nations and socioeconomic classes.

The title of the book, which is inspired by the Genesis account about the Tower of Babel, seems to contradict McCarty’s argument that “God wants to speak to [people] directly through the Bible in a way that is culturally relevant to them.” Instead of using a passage in which God confuses people’s language, McCarty might have more effectively utilized the Pentecost account from the New Testament book of Acts. When followers of Jesus were filled with the Holy Spirit, they “began to speak in other tongues,” allowing people to hear the Gospel message in their own language (Acts 2:4-6).

One section of the book covers principles of communication, showing how words and other symbols are never foolproof, leading to a “stew of meaning” rather than one clear-cut message. Additional chapters explore hermeneutics, the process of interpreting what the biblical texts mean.

McCarty argues for “a transcultural hermeneutic” that allows readers in all places and all times to understand God’s message for them. And in the book’s most helpful chapter, he shows readers how to ask a series of questions about the cultural issues in each Bible passage they read.

These are important topics, but scholars who have already thoroughly explored this territory won’t find anything fresh here. And McCarty’s treatment is too esoteric for rank-and-file believers. As a result, while the author writes clearly about the intersection of communication theory and theology, it’s not certain who his audience is. This and the lack of inventive insights seem likely to limit the book’s overall appeal.