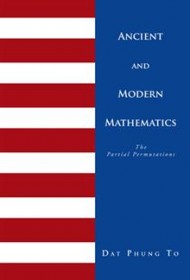 In a market glutted with mathematics textbooks, Ancient and Modern Mathematics is a refreshing approach to mathematical problems that have been around since ancient days. Author Dat Phung To says, “Studying the ancient problems is my great pleasure; pursuing solving them is my favorite hobby.”

He gives readers more than a cursory look at these iconic mathematical challenges. At the same time, he convinces readers that the solutions can be determined through the use of paper and pencil rather than programmable calculators. After all, if the ancient mathematicians could do it sans electronics, so can the modern practitioner.

In the book’s first half, “Arithmetic and Geometric Problems,” the author works 11 classic arithmetic problems before delving into geometry. The first two, “A Basket of Eggs” and “The Sum of Rice in Sixty-four Squares of Chessboard,” will be familiar to most mathematicians, even students. One problem requires only a firm grasp of algebra. The other applies binomial expansion using Chinese mathematician Chu Shih-Chieh’s triangle of coefficients, which evidently predates Pascal’s by some 360 years.

In the book’s second half, “The Partial Permutations,” the author introduces the relevant rules, definitions, and symbols in a logical, reader-friendly manner. He then navigates through partial permutations in a traditional way and through his own unique method of expansion.

The book is charmingly laced with bits of history, but it’s the math, the meat of the book, that makes it a worthy addition to any mathematician’s library. By offering multiple solutions to each problem, the author aims to offer readers some alternative thinking. He hits the mark again and again. His diagrams befit his sensible explanations, and his charts are nothing less than a labor of love.

Students of algebra, geometry, and discrete math will appreciate Ancient and Modern Mathematics, and teachers should consider adding it as a supplement to their standard textbook fare. One hopes there are more books to come from this “man who loves mathematics.”