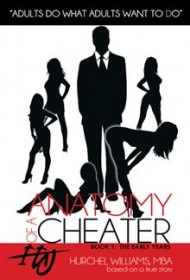 In Anatomy of a Cheater, life coach Hurchel Williams promises a “psychological journey into a mind of a man” that’s designed to explain why men “cheat, lie, or reach for multiple women.” By honestly examining his sexual history and feelings about relationships, Williams’ goal is to acquaint readers with the stages of the cheating process and show “how the normal man (thinks) along the way.”

Williams accomplishes this goal, but how he goes about it is puzzling. Nearly a third of the book is devoted to extremely graphic details of his lovemaking with numerous women. Considering that every encounter ends with the woman achieving multiple orgasms and pledging her devotion to Williams, these parts seem to serve no purpose other than ego gratification for the author or fantasy fodder for readers.

The book is the first of a trilogy and chronicles Williams’ sexual escapades from when he first “played doctor” at age 5 to when he had three simultaneous girlfriends as a Marine in his early 20s. Along the way, he shares more than 60 key points he’s discovered about cheaters’ motivations (“Even at an early age,” he writes, “the desire for unlimited sex overcomes the passion to do what’s right.”) It’s debatable how valid these points are, though, because they’re based solely on Williams’ experiences, without statistics or observations of other men’s behavior to back them up.

Williams’ writing style can be awkward at times (for instance: “When they noticed I wasn’t participating in the laughter but was outwardly serious, their disposition dried up immediately”), but it is effective enough to convey his basic premise: men cheat in order to dull emotional pain. Ultimately, though, the overriding impression his book gives is that, rather than numbing pain, he and other men cheat simply because they want to. This will surely disappoint women who pick up the book hoping for something with more depth and insight.

Also available as a hardcover and ebook.