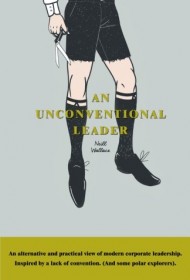 Having a social sciences degree and only a year’s worth of business classes under his belt, Wallace is himself an unusual corporate employee and leader, promoted in a short time to head of the global sales and marketing department of a prominent medical devices company. Wallace was inspired by the leadership styles of his personal heroes, South Pole explorers Roald Amundsen and Ernest Shackleton. From both, he learned the virtues of bravery, of acquiring knowledge and making sacrifices for the sake of protecting the team rather than simply finishing the goal. He treated his team members the same way the successful explorers treated theirs: He valued, trusted and defended them, even before his boss, and kept the doors of communication open.

Some of the conventional leadership views he wisely rejects include thinking of business as a numbers game and using fear-based tactics to gain results through intimidation and power assertions. His most valuable point is that if business leaders are people-focused by getting to know their team members — their strengths, weaknesses, motivations, and concerns — work will be more profitable and goals will be reached.

Wallace writes in an amusing style that leaders, as well as aspiring leaders, will enjoy. Unlike the many staid business books that have been published, his book includes humorous anecdotes, such as one about an untrained, large basset hound successfully jumping his first hurdle in an obstacle course as a result of encouragement.

An Unconventional Leader is an enlightening read for anyone who is frustrated with the results of traditional corporate leadership conventions and, consequently, is looking for a new approach.