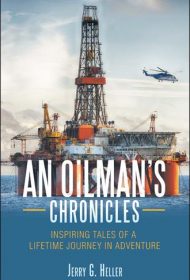 In this memoir, Jerry G. Heller recounts how his decades in the oil industry helped him achieve his major life goals: to learn different languages and to travel.

The Netherlands-born Heller began life in a small village where farming was the main source of income. Deciding that the oil industry was a way to fulfill his dreams, he worked as a mechanical engineer in several countries, in sales and upper management.

An Oilman’s Chronicles mixes the personal (playing in a rock band, winning a lottery jackpot with some friends, researching his family history, etc.) with the professional. The former is more interesting, as the oil industry material can be a little dry. He’s often vague, talking about “major” oil companies or unnamed third parties who help broker big deals, and jumping ahead years at a time in the narrative.

There are other less important, though nagging, problems. The author’s language can be somewhat stilted (“Repeatedly, the nuns contacted my parents to complain, and I experienced the outcome as tension”), perhaps because English is not his native tongue.

Heller also lapses into oil industry jargon that may baffle readers. (A well “was spud in an attempt to tap into a gas reservoir,” and “One of the ideas was to install two nodding donkeys in one drilled hole and produce from two different oil-producing zones.” In addition, his wife and family seem to be peripheral to his story; their interaction would have made for a more complete picture.

One of the highlights of the book occurs in the last two chapters, when he offers his view of the future. He predicts that the International Thermonuclear Experimental Reaction project will soon provide unlimited clean energy. His explanation is quite interesting, and readers might wish to learn more.

While the book is of more interest to his family than general readers, Heller has written a suitable, though not highly detailed, picture of his life.