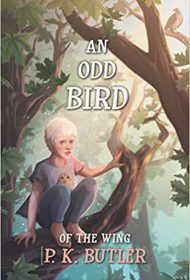 In the first book of P.K. Butler’s debut middle-grade trilogy, an 11-year-old girl realizes she has a mystical connection to birds and is determined to find an explanation.

Claire is obsessed with birds. She is also highly self-conscious of her appearance: She’s tall, with white hair and lashes, and startling yellow-gold eyes, which she hides behind blue lenses. She lives with her widowed mother in a house surrounded by woods, which she explores daily, binoculars always at hand. One day, after a mysterious, close-up encounter with a red-tailed hawk, Claire comes upon Jerry, a bedraggled old man who carries a pet hen on his shoulder. Gradually, Claire and the eccentric man become friends, and he tells her a fantastic story about the hawk, Big Red.

Meanwhile, Claire is charmed with her new friend Victor, who often accompanies her on her forest explorations. But a bewildering mystery tugs at her: Why do birds act as if she has some sort of spell on them? Although she knows her observations are crazy, she decides to enlist help from Victor and Jerry. But Claire’s friendship with Victor is tested when she learns he hangs out with Billy, the school bully. Worse, she discovers Billy’s loathsome alcoholic father is determined to kill Big Red—but she’s equally determined to protect her.

Butler’s story is resplendent with rich descriptions (“Loud as a trumpet and lyrical as a flute, the barred owl’s call echoed in the night”; “…a flock of goldfinch arrayed itself prettily, like golden pears, in a locust tree…”). She ably renders her characters—especially Claire, who is kind and courageous even while struggling with her identity and insecurities—and effectively portrays the conflicting emotions in some relationships; although Billy resents his abusive father, his desire for his approval is heart-wrenching.

With its flowing narrative, dimensional characters, and beautifully vivid details, the story is utterly immersive. Young readers will eagerly follow Claire into her next journey in book two.