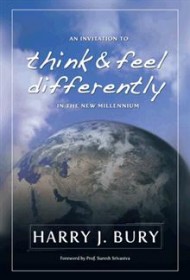 Harry J. Bury is professor emeritus of Organizational Behavior, an American Catholic priest, world traveler, and lifelong social and political activist whose pacifism compelled him to protest the Vietnam War by chaining himself to the American embassy gate in Saigon. It also led to his 2005 arrest for acting as a human shield between Israeli soldiers and Palestinians in Gaza.

A peacemaker, risk taker and visionary, his unusual life informs this hopeful treatise calling for a new way to comprehend the world as it is–and as it can be. His “Emerging New Millennium Worldview,” a paradigm of what the future could be, is best expressed in his “Four Conscious, Fundamental Assumptions”: 1) We are always in the process of discovering what is true, so there is no absolute certainty and no one is either right or wrong; 2) No problems exist because we visualize and create what we want, and no one wants problems; 3) We are all one if we envision ourselves as a unified whole; 4) We are all good, and we intend to do what we believe is good, so there is no evil.

Bury uses storytelling to inspire transformation and suggest scenarios for an alternate future. The second half of the book features fable-like narratives —told in the present tense as if they were already reality–proposing new possibilities for wellness, work, intimacy, education, effective justice for lawbreakers, the environment, politics, and spirituality, as if they were already common occurrences.

The author wants readers to take a leap of faith with him and envision and help establish the New Emerging Worldview he has imagined. However, the conceit takes readers out of the realm of spirituality/self-help and into the world of fiction. As a result, the book is neither fish nor fowl. Influenced by the Cultural Creative and the Radical Optimism movements, this book will nonetheless appeal to readers of Marianne Williamson and possibly Rhonda Byrne’s books.