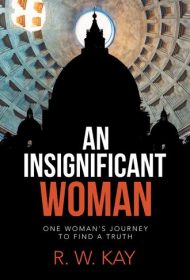 In R.W. Kay’s new novel, a young woman uncovers a conspiracy as she searches for the truth about her family.

The story begins as Sarah Birch prepares to leave her job at DANNAR Biochemical Company to search for her biological family. Sarah was raised in a Catholic orphanage and then by adoptive parents and has no information about her ancestry.

Sarah discovers a cousin, George through a DNA website and travels to Missouri to find him. With the help of Vickie, an attendant on her flight, Sarah connects with George, who reveals the truth about both of their mothers. The women were nuns in Provence, impregnated through artificial insemination at the urging of the Church.

Sarah then travels to France to meet her aunt (George’s mother). There, she learns of a secretive group devoted to Mary Magdalene, and a shocking genetic engineering project involving DANNAR and the Church. Meanwhile, she finds love with Dave, an archaeologist researching biblical-era relics, but also confronts danger from forces worried she’s getting too close to the truth.

Reassessing Mary Magdalene’s reputation — reframing her as a powerful disciple of Jesus, possibly even his wife, rather than a prostitute — is an inherently powerful idea. The Church’s impregnation of nuns and the goal of this bizarre endeavor also makes for a gripping theme. But the novel’s relatively slim page count underserves both subplots, giving the narrative a shallow feel.

Many of the plot points, from Sarah’s romance with Dave to the threats she encounters, feel rushed. Likewise, Kay introduces fascinating supporting characters – from an embittered former colleague of Sarah’s to the nuns in the Provence convent – but doesn’t give them enough space to become three-dimensional. Characters also seem too conveniently willing to give Sarah the information she seeks. More obstacles in her quest would add depth to the plot.

The premise of An Insignificant Woman has great potential, but the story needs revision before it’s likely to appeal to its target audience.