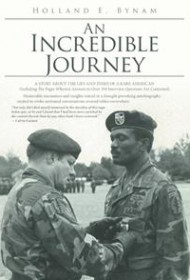 A fascinating life story can hold a reader’s interest even when told with the barest of literary flourishes. In An Incredible Journey, author Holland E. Bynam recounts his storied life and career in an embellished style, a decision that often upstages the narrative.

Bynam grew up in a close-knit family on a Texas farm. He was an athlete and hothead in school, getting into fights he occasionally had to bluff his way out of. His Army service in Vietnam led to several medals and decorations, and ultimately to work with the Joint Chiefs of Staff. He was a leader and teacher, able to meet and mingle with U.S. presidents and other heads of state, creating a legacy worth preserving.

This nonfiction story is told as an interview before a fictional panel. Leader “Richy Famous” has decided that Bynam’s life and opinions have the power to change the world. Bynam writes in the introduction that he chose this format to avoid the appearance of bragging, yet the panel not only asks things like, “What can you say about this sense of responsibility that seems to vibrate with nobility in the very fiber of your being?” it also breaks into a round of applause at one point when Bynam answers a question.

The book has other shortcomings. The interview sometimes consists of unattributed quotations, which are hard to follow, and the text includes many misused words (“revelry” for “reverie”; “insure” for “ensure”; “faired” for “fared,” and so on). In addition, Bynam has a grievance against Oprah “Winfree” for not inviting him to appear on her show and spends several pages enumerating who is at fault and why, a pattern that also extends to colleagues, teachers, spouses and superiors in his many extended riffs.

Clearly, Bynam has led an exceptional and interesting life; in choosing to inflate his story in this way, however, he sadly denies readers the chance to appreciate his victories and accomplishments for themselves.