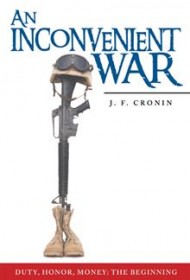 The novel ostensibly focuses on Marine General Jake Gregg and his air-mobile/amphibious 15th Marine Expeditionary Unit assault on Kandahar to rescue a botched Army ranger airdrop. It also tells a fictional inside story of maneuverings at top levels of the Department of Defense to create a rationale to invade Iraq while delegating Afghanistan, where the 9/11 attack originated, to an inopportune side-show.

Like his former novel on the Afghan war, Duty, Honor, Money, this one pulls no punches. Cronin chillingly exposes (fictional) neocon politicians deliberately using misinformation from cable networks — “arguments supported by the skewed data put forth by like-minded people” — to make Americans willing to fight “a war that doesn’t need to be fought” and in the process, making huge personal profits by issuing no-bid contracts to privatize as much as possible and hide the true cost from the public.

Nor does Cronin spare the generals who are more interested in their careers and inter-service rivalries than the lives of American soldiers. In a cornerstone event of the story, driven by media obsession more than military necessity into a fictionalized version of a real battle in the Shahi Valley, they leave good soldiers dying in the service of money and air time.

The author sometimes takes a heavy hand in delivering background information, which can make for stilted reading. For example, here’s one character talking about the ocean-bound 15th Marine Expeditionary Unit: “Each flotilla is going in circles, and they aren’t talking to one another. CENTCOM supposedly has control of them. They have control of the MEU, but the carrier battle group is a national asset and can’t be used without White House approval…”

Nonetheless, the author’s tell-it-like-it-is style makes this a page-turner — one that will have readers wondering just how much of this look-back to the events of 2001 is fiction.