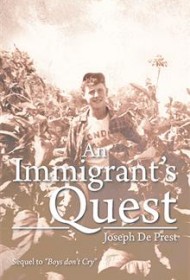 This thoughtful and exciting (if overlong) second volume of Joseph De Prest’s memoirs concerns the years 1954 to 1958, when the plucky Belgian grew out of pained adolescence into young adulthood, taking plenty of hard knocks en route. In a classic tale of immigrant striving, we see Jozef (soon to be known as Joe), his two brothers and their troubled father leaving war-damaged Belgium for eastern Canada, there to struggle with a new language, frequent bigotry and economic uncertainty.

DePrest, who described his frightening war-years childhood in the earlier Boys Don’t Cry, here reveals himself as an ambitious but sensitive 17 year old full of hope (“the stars, as if knowing someone was looking at them, began to disport themselves”) who immediately gets his hands dirty behind a plow horse named Queeny on a frozen farm in Ontario and embraces Bill Haley and the Comets. With his countryman Henry Andergest, he heads West to become a “bush ape” (logger) in the dangerous lumber camps of British Columbia, then goes to sea with misfits and cutthroats aboard a tramp freighter bound for Nagasaki.

The book is dull and repetitious in places, and could use a strong editor, but we see, in spades, that by the time he’s 22, DePrest has lived a full life. He’s bedded a beautiful older woman and fallen for an Italian waitress who will break his heart. He’s punched his way out of near-fatal scrapes, wrestled with black bears and fought his dad over his parents’ doomed marriage. Along the way, DePrest has also developed a gift for language. Behold this quiet scene in chilly Alberta: “On the fence posts that showed between sky and pasture, swallows plunged back and forth to challenge the intruders; blackbirds were fastened to the loops of overhead wire like a ragged black wash.”

Not bad for a garcon who grew up speaking French and Flemish. Readers will hope for a third volume of this stirring life story.