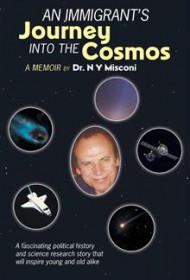 With his memoir, An Immigrant’s Journey into the Cosmos, astronomer N. Y. Misconi appears to have a three-fold purpose: to document his scientific publications and achievements, to acquaint neophyte researchers with the economic realities of acquiring project grants, and to “inspire some students to reach for the stars.”

Misconi’s first chapters cover his formative years in Iraq and Turkey: his nascent interest in rocketry and astronomy, his education at the University of Istanbul, and his work as a correspondent for a Baghdad newspaper. He also recounts his experience as an astronomy expert on Science for All, a government-sponsored television program and some of the political upheavals in Iraq and Turkey during the 1960s. The details he provides in these chapters, however, are too sparse to fully engage readers.

Misconi chooses to attend the State University of New York for his graduate studies and, after traveling to Albany, begins the path of theoretical and experimental research that he will continue to pursue during his career. Among the research projects he directs or collaborates in are those concerning zodiacal light and interplanetary dust, particle spin and laser particle levitation, infrared wavelength scattering, and the creation of laser body armor. While describing his work, Misconi is careful to provide beginning researchers with his methodology for obtaining funding and to depict the uncertainties of a research-oriented profession. He also offers a list of his journal publications for a more detailed exploration of his projects.

Misconi’s book is marred by typos and verb agreement problems but nevertheless should appeal to those with an interest in astronomy and astrophysics. In an easily accessible, conversational tone, he presents a rounded portrait of the work-a-day world of the scientific researcher and addresses the problems that he or she may face with practical advice. Readers may also be interested in his encounters with luminaries associated with the field, such as Donald Brownlee, Fred Whipple and Buzz Aldrin.