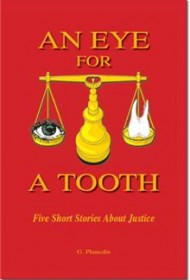 At the end of this story collection, the author notes that while “these stories are nothing but a pack of lies,” some of the events “could take place and maybe they should.” The back of the book notes that the author’s “dissatisfaction with the Judicial System…is reflected in these stories.”

No surprise, then, that these five stories have one message: taking the law into your own hands and shooting to kill is the only way to right the wrongs of a society that won’t catch and punish the bad guys.

In the first story, former marine Matthew learns that his past girlfriend, Maggie, has been beaten badly. When he discovers the details, he and Maggie lay a trap. After whacking the bad guys with an axe and burying them alive, Mathew takes their money and car. Finally, Mathew and Maggie are able to split for Hawaii.

Next, a pretty and smart high school student named Jenny is abducted. When the police aren’t quick enough, Jenny’s older brothers (one a former Marine) start searching. They locate a biker gang, creep quietly to their campsite and find Jenny, bound and gagged. By the end, all eight bikers are dead.

In the final three stories, which include a strangling at a boarding home for seniors, a startling attack on a retired couple, and the kidnap of a 9-year-old girl, seniors use their ingenuity and brains to thwart more violence toward themselves and others. All robbers and murderers are killed.

Author G. Planedin’s writing is unimaginative (he uses the word “proceed” endless times). Technical mistakes, such as missing words and punctuation, distract. The author’s prose is in need of tightening (readers don’t need to be told everything; they can fill in some blanks), and the plot develops in predictable ways. All told, the flaws outweigh the positive, and this collection is likely to have limited appeal.