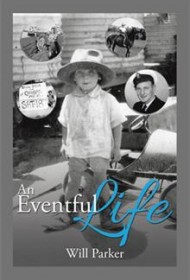 Memoirs can show us parts of the world we’ve never seen and even take us backstage to moments in history. Will Parker led An Eventful Life and shares many such stories, but some of his material borders on inappropriate, making the intended audience for this book questionable.

Parker was born in the late 1920’s in New South Wales, Australia. His father worked in the silent film industry, taking the movies around from hall to hall and showing them with live musical accompaniment. Baby Will was often sleeping behind the movie screen as his mother sped up or slowed down her piano playing to match the action on screen. Parker’s later life included school, a stint in the Royal Navy, and moves around the world for various jobs.

His narrative is funny at times. In the Navy, he writes, “I found sleeping in a hammock particularly restful. Some chose a loose stretch, but I liked to have the ropes pulled as tight as possible so that the sides curled in above me like a cocoon. Fortunately, I never emerged as a butterfly.”

Yet other anecdotes are of questionable taste. Stories about plagiarizing work for a newspaper job and only “slightly altering the words,” a scene where he pulls a fake gun on a date and “jokes” about rape, and other disturbing tales from his personal life and teaching career are in poor taste. In one passage, he even brags about sleeping with a colleague’s wife and includes the facts that she laid on top of him and “seemed to experience maximum delights.”

An Eventful Life offers some interesting anecdotes, but many work to the detriment of the book as a whole. That and misspellings, misused words and a scattered sense of chronology all point to this being a family keepsake rather than a book for a wide audience.