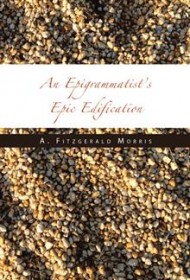 A book is often an end unto itself, but sometimes it exists to establish the author’s expertise or promote a product or service. A. Fitzgerald Morris, who also answers to “Anthony the Epigrammatist,” collects an assortment of tongue twisters into An Epigrammatist’s Epic Edification to advance his business creating custom cards. It’s a clever idea, although the book itself has limited appeal simply by virtue of its contents.

Morris writes in an introduction about contributing tongue twisters to an online gaming community he was involved with, only to learn people were saving them. With a fan base in place, he branched out and started writing humorous cards for friends and family who loved them, and has now taken the idea further, compiling a book filled with these impossible-to-say sentences.

These are definitely not phrases that trip off the tongue. Consider: “Teething Teen Teamster teased Tearful Teacher’s Teetering Teal Teacup!” or “Diffusing Delectable Dietary Delights during Doctor’s Daughter’s Due Date Delivery demonstrates Deep Discipline, Donors divulge!” And so on. All the twisters feature mostly capitalized words, with some random lower-cased words inexplicably thrown into the mix.

Like a book of knock knock jokes, these tongue twisters begin to run together for the reader after the first few pages. Although they’re descriptive, it can be hard to picture the fantastical scenes they describe and many seem to stretch so hard for alliteration that the sentences don’t make much sense. A few illustrations might help bring these fanciful absurdities to life and also help readers to imagine what a card designed for them might look like.

An Epigrammatist’s Epic Edification is unusual, and that’s a strength. Hopefully it will bring new business Morris’s way by serving as a platform for him to promote his cards. As a stand-alone book, though, it offers little to readers save a possible chuckle or two.