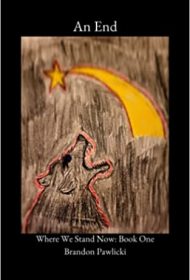 The first installment of Brandon Pawlicki’s horror saga focuses on part of America that has suddenly become perilous on many fronts.

As the story begins, Vallerie Sabell and her boyfriend, Jaxton, pledge their eternal love in a Wiccan ceremony that ends with the statement: “I vow to do no harm.” This peaceful moment is short lived; readers learn two pages later that a wounded Vallerie and her brother Allan are the only survivors of a school shooting. Jaxton is dead, along with the others.

Soon after, Vallerie is attacked by the father of a student who died, who believes her Wiccan beliefs caused his son’s death. In a coma for months, she awakens to a different world. Unfortunately, while Vallerie has slept, readers have also been kept in the dark. Suddenly, zombies roam the countryside, but we never learn how this zombie apocalypse began or why there are only occasional zombies instead of hoards.

Meanwhile, there’s a military draft, and resistors like Val’s brother are being rounded up and executed. Bombs are dropped on Vallerie’s Midwestern hometown; it’s unclear whether they’ve been released by a foreign power or by the U.S. to destroy zombies.

Vallerie, Allan and a friend set off cross country, seeking a place where they can live a peaceful future. But as they are pursued—chased by the army (now called “the Bastion”) looking to execute Allan as a draft dodger; a citizen militia aiming for a reward, and zombies—Val’s vow to “do no harm” is tested repeatedly.

There’s plenty of action throughout, and Vallerie develops into a strong, empathetic protagonist who continually proves she can out-fight and out-scheme any man. Still, too many questions remain about the pandemonium’s origin and whether it’s a worldwide or local phenomenon. The author’s misuse of verb tenses also distracts.

Hopefully, the loose threads will be cleared up in Book 2, Fangs Bared. For now, Pawlicki’s depiction of a dystopian future offers enough rewards to keep readers involved.