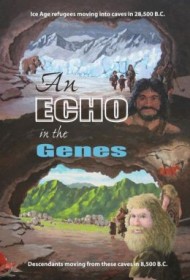 David W. Dye’s An Echo in the Genes is based on an intriguing thesis founded in his work as the director of a research laboratory dedicated to understanding the genetic basis of alcohol addiction. He hypothesizes that during the last Ice Age, when human groups were isolated due to great ice sheets and arctic conditions, certain groups in the coldest climates developed means to survive that later made them genetically more vulnerable to alcoholism, a side effect of what he terms a cold climate kidney type. An Echo in the Genes sets out to trace the origins of this long legacy.

Dye’s book is a sweeping synthesis of human evolution from some 36,000 years ago to the present. He draws upon climatology, geology, genetics, physical anthropology, and archaeology. He especially focuses his narrative on tracing people who lived in the coldest environments, from the caves of southwestern France and northern Spain during the most severe Ice Age conditions through their subsequent migrations around the earth once the climate became more moderate.

This broad and ambitious effort at synthesizing so much from so many disciplines makes the book both interesting and flawed. Dye draws on an impressive array of scientific disciplines, yet he sources outdated publications, ranging from 1939 to the most recent in 1991. Since the mid-1990s, many of these fields, especially genetics and anthropology, have revolutionized and rewritten our prior understanding of human evolution. Dye particularly relies too heavily on the works of physical anthropologist Carlton Coon for ideas about human evolution and variation. Coon’s publications, from 1939 to 1969, while influential at the time, have long since been shown to be too simplistic by subsequent anthropological and genetic research.

Though based on outdated sources, Dye’s basic premise is still intriguing. It would be fascinating to see him take up the hefty challenge to study the more current findings in all the disciplines he draws upon toward testing this thesis about climate, genetic adaptations, and alcohol vulnerability.