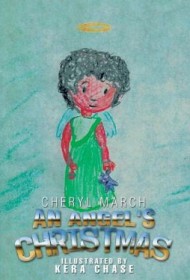 Author Cheryl March uses Christmas as the backdrop for a tale of families, reunions, and miracles large and small in her children’s book An Angel’s Christmas.

On Christmas Eve, Debbie, a young girl, and her younger brother Samuel prompt the family to visit their Aunt Shirley, who would otherwise be alone. Soon, a stranger gives Samuel a mysterious package addressed to the reclusive neighbor Mr. Gray, and Debbie finds a locket with an old photo of a woman who she recognizes as Aunt Shirley. Eventually, Mr. Gray is summoned, and his package is revealed to be a Medal of Honor from his war days, and Aunt Shirley is given the locket Debbie found.

The illustrations, embedded sporadically throughout the text, are simple but mostly effective; the writing, however, presents challenges. Debbie’s family is described as “standing at Aunt Shirley’s door for the first time.” But there’s no mention of why the kids have never been here before—and it seems even stranger when soon after, Debbie and Sam are left with Aunt Shirley as their parents attend to other duties.

There are no chapter divisions in the book, or any indication of a new scene or the passing of time. When Debbie is described as letting her head hit the pillow, the very next sentence reads “Everybody wake up! It’s Christmas Morning!” There are also errors in punctuation and convoluted sentences that make various passages extremely hard to understand:

“Sam had finished doing his wrapping and before he did the usual bursting in, he actually knocked, ‘Can I come in “Debbie?’

“’Wow, what Christmas could do to people!’ Sam came in and I could tell he wouldn’t be awake much longer.”

The story’s resolution is nicely planned, but the lack of clarity throughout the book means that readers can’t enjoy the experience nearly as much as the characters in the story.