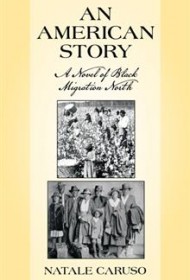 Natale Caruso’s historical novel An American Story traces the migration of slaves from Texas to Chicago.

The story opens with the unexpected and unwelcome arrival at the home of Judge Zacharias Maverick of a small group of slaves asking to free a young girl, Esther, whom Maverick abuses for his own pleasure. Unwilling to free Esther—known as Millie to her protectors—Maverick threatens the group, which flees. When Maverick is later killed, Millie runs North with her true love, Sam. Joined with other Negroes, the story takes off as the travelers face losses, ghetto life and the hardships that come with being Civil-War era African Americans.

A dialogue-rich book that moves at a fast pace, the story entwines letters, news headlines, and verses into the text, steeping the book in culture and history.

The passage of time, however, is sometimes jumpy, and gaps in the story occasionally leave readers thirsty for more details. For example, in one paragraph, Sam’s companion expresses his intention to marry; the very next paragraph announces that the marriage took place, without sharing Sam’s reaction, or any further details.

Additionally, the author sometimes supplies historical information in ways that sound more like a textbook than seamless narrative prose; for example, this passage explaining how white landlords cheated black sharecroppers: “It was common practice for southern landlords to hike expenses and reduce profits. And since no black man could bring charges against a white man without risking jail, public beating, or lynching, the system perpetuated itself unchallenged.”

The writing style is otherwise inviting and the author demonstrates a solid grasp on the historical details and characteristics of the era. The plot draws momentum from the history interwoven throughout the story.

Despite the flaws mentioned, the book is appealing overall. Fans of historical fiction and those curious about the plight of African Americans in our country’s past should find this an enjoyable read.