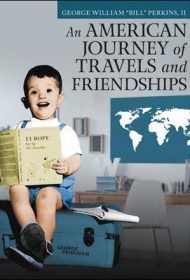 Told in a series of 96 vignettes, Bill Perkins’s book recalls a life of travel and adventure, from the author’s time at a Montana dude ranch in the 1930s to his desperate fight, along with shipmates, to douse a fire on the U.S. Navy ship Cimarron in 1945—and more.

Perkins was born in Salem, Massachusetts, in 1926. He enlisted in the Navy at age 18, serving in the Pacific Theater during WWII. After the war, he married and filmed travelogues, showing them on the lecture circuit, among other pursuits.

The brief vignettes he recounts here are arranged non-chronologically, resulting in a timeline resembling a sometimes-disjointed conversation. Readers learn about Perkins’s 5,500-mile trip across Canadian dirt roads in a French Renault to prove to Americans that the small car could handle the journey, and his pioneering use of the 16mm widescreen format for travel films. They also meet people like buckskin-wearing, dude ranch owner Dick Randall, who became Perkins’s adopted grandfather.

Unfortunately, the book’s structure invites a wearying level of redundancy. Details are repeated until the digressions move from a bemusing idiosyncrasy to a major distraction. For example, Perkins reminds readers repeatedly of his father’s time working in Panama and Costa Rica, and within a few pages, tells the same story about accompanying world-famous traveler Burton Holmes in a taxi to Carnegie Hall, where Holmes was scheduled to show a travel film. Unfortunately, the two accidentally left the film in the cab. There’s also a jarring change to third person in the final chapter.

Through Perkins’s vignettes, general readers get a glimpse of an earlier time, when most boys dreamed of becoming cowboys and some even had the chance to meet one. But due to its personal nature, the book is more likely to be cherished by friends and family members.