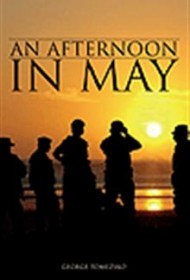 Civil War historian George Tomezsko feels certain that the Battle of New Market, Virginia, on May 15, 1864, has been unjustly downplayed by scholars and best-selling battlefield authors. His mission while researching and writing An Afternoon in May: to call attention to the battle and place it in its proper context.

Confederate troops more or less prevailed on the battlefield that day, and thus gained time in the effort to stave off Union troops from the north. But it was something else that motivated Tomezsko to chronicle the battle: Many of the wounded and dead Confederate soldiers that day were among the youngest to raise weapons during the five-year conflagration. They were teenaged students enrolled at the Virginia Military Institute, and they were barely trained at all for real-life combat.

Much of the battlefield description is understandably bloody, and some of the tactical decisions are rather technical. An Afternoon in May will be of interest primarily to those who want to read the gory details, rather than the context surrounding the war that pitted brother against brother and tore families asunder. The author does provide plenty of context in one area: the history of the Virginia Military Institute, the destruction of it by the Union troops, and its eventual resurrection post war.

Tomezsko writes clearly, if at times melodramatically, providing a view of what he writes on the back of the book “is arguably one of the most compelling military stories in American history.” Although he tends to glorify those willing to kill their brothers, he also commendably reminds readers occasionally that achieving glory can be deadly, as it was for so many in this battle and others during the Civil War.