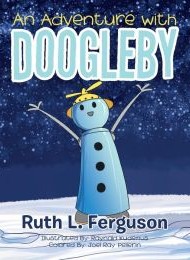 A whimsical, if problematic, story that includes vibrant illustrations, An Adventure with Doogleby will fuel the imaginations of young readers, while ultimately leaving them wanting more.

As the book opens, Doogleby, a metallic alien, pops by the home of his human friend Tom and invites him on an adventure. The two fly off past the clouds and moon until they make it to Stardust Land, Doogleby’s home. Tom meets Doogleby’s friends and eats their delicious food, occasionally reminding his alien friend that they must be back to Earth before breakfast. But when they start to head back, Doogleby discovers he’s eaten so much that his propeller won’t start. Stardust, when sprinkled over his body, saves the day, and the friends return to Tom’s room before his mother comes in to wake him.

The main conflict of the story occurs when Doogleby is unable to lift off after an evening of glitter cakes and sparkling lemonade, but the predicament isn’t solved by creativity or problem-solving on his part or on Tom’s. If these elements had been woven into the story, they would have conveyed a powerful message for children. Rather, the characters are rescued by the inexplicable properties of stardust.

Doogleby himself also remains unexplained throughout the book, which never touches on his relationship to Earth or how he knows Tom. Ultimately, these unresolved details and use of deus ex machina undermine the story and the universe it attempts to create.

Without a moral to reap or puzzle to solve, An Adventure with Doogleby turns into a charming but directionless series of events—and provides a cast of characters who spark more questions than answers.