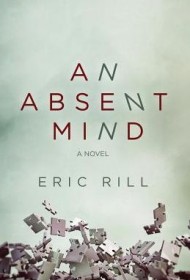 Based on his father’s eight-year struggle with Alzheimer’s Disease and the strains it inflicted on a family, Montreal native Eric Rill’s third novel ably reveals the terrors of a tragic disease. It’s an uncommonly brave book that clearly took guts to write.

Rill deploys five narrators in short, alternating chapters, including: Alzheimer’s victim Saul Reimer’s devastated wife Monique; his self-absorbed son Joey; his devoted daughter Florence; and a Canadian Alzheimer’s expert called Dr. Tremblay, who serves as the reader’s eloquent technical and medical advisor, filling us in on arcana such as the measurements of dementia via the Reisberg Scale and Functional Assessment Staging.

Inevitably, Saul Reimer himself proves to be the most affecting voice as this willful, playful businessman is reduced by the disease in his 70s, and his ability to connect with others deteriorates from spiky irritation with what has befallen him (“So I end up in a B-movie version of Groundhog Day”) to a few tortured monosyllables (“NOWhere no ThiNg”).

An Absent Mind reads much more like a diaristic case history than a work of fiction (“I feel like I’m almost invisible,” Monique laments as her husband begins to slip away. “People hardly ever ask how I’m doing, and when they do, it seems like they are asking because they feel they have to, but they really couldn’t care less.”). Even so, author Rill’s grief-stricken love for his father, Norman, who died in 1998, invests every page with true feeling. Other Alzheimer’s families will likely find the book moving and illuminating. An Absent Mind is a worthy addition to the literature of illness.