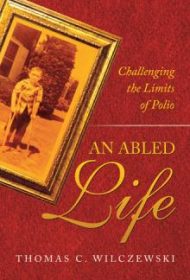 In his memoir, Thomas C. Wilczewski details a life replete with struggles and triumphs.

In 1949, at age 5, the author was stricken with polio; he spent a year in an iron lung and many months more recovering from various surgeries. Except for family members, his existence was marked by isolation, which fostered a remarkable determination to succeed. Indeed, over his lifetime, he became a prosperous businessman, artist, poet and respected member of his community.

As if it wasn’t enough dealing with the effects of polio, which confined him to a wheelchair, the author faced further tragedy when his family’s middle-class Jersey City home collapsed in 1984 because of shoddy demolition work being done on a neighboring building. Everything the family owned—records, heirlooms, furniture—was lost in the rubble. The shattering disaster turned his elderly parents into empty shells; his older brother’s health faltered as he tried to get the family back on its feet; Wilczewski’s engraving business was lost as well.

Through resolve learned early, Wilczewski resurrected his business and his life—and was determined to tell his story. “I was concerned that what had happened to my family and me on that day eventually would be forgotten . . .,” he writes. He knew that if “I didn’t write it down, the facts would be lost—and, with them, part of the Wilczewski family history.”

The author has done an excellent job of doing just that. His prose is intelligent, clear and detailed (his descriptions of his family’s living quarters and the Gammontown section of Jersey City paint a vivid picture). He eschews self-pity and offers a well-drawn cast of characters. Ultimately, he makes readers feel the crushing helplessness his family experienced as they faced tremendous challenges.

This will be a cherished family record, as intended. It should also be appreciated by anyone facing long odds in life and those interested in revisiting an earlier time in America.