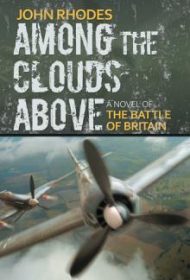 John Rhodes’ brilliantly written historical novel centers on a Spitfire pilot and a mathematical genius struggling through WWII’s Battle of Britain and their own lack of personal confidence.

The novel presents the grim reality of “the first great air battle in human history” in a personal light: Johnnie Shaux (pronounced Shaw) is a fighter pilot who knows the odds are against him and that he may meet death “among the clouds above.” As a result, he resists “being drawn into a world where life and death had meaning and the future held purpose and even hope.” Meanwhile, Eleanor Rand, used like a doll by the men in her life, is a WAAF assigned to RAF headquarters and struggling to rise above subservience, put her math skills to good use and contribute to the war effort.

Johnnie and Eleanor met at Oxford while math students. Time, faint-heartedness, and nihilist outlooks have separated them, but fate and (of all things) mathematics reunite them in a world where ill-fated lovers are the rule, not the exception. Eleanor applies mathematics to build a model of the air battle to determine strategies to maximize chances to win the air war that will determine Britain’s destiny.

This engaging history laced with personal struggle is spiced with well-researched and thrilling aerial combat scenes; for example: “Within seconds, the neat formations had unraveled into a whirling kaleidoscope of fighters, wheeling, turning, climbing, diving, rolling, intersected by streams of tracer, locked in a furious dogfight.”

Despite the action, the story never sacrifices character development and an appreciation of the humanness of those who serve as minor pieces in the chess game played by the masters of war. Readers will also be pleasantly surprised by how the author flawlessly—even captivatingly—weaves mathematics into a war/love story.

As a bonus, Rhodes’ 24-page “Authors Notes” contain facts even the most dedicated WWII aficionado will find new and interesting.

This is a WWII novel to savor.