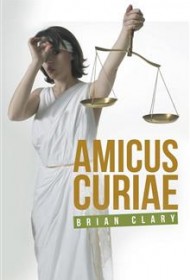 In this engrossing, action-packed legal thriller set in the modern day, the teen daughter of young Texas lawyer Mickey Grant goes missing. Mickey decides to take aggressive and ultimately dangerous actions to shake information about her child from a man on death row.

Mickey’s lofty career ambitions already have doomed her marriage and snatched away primary care of her now 15-year-old daughter, Reagan. The situation gets worse when—on her watch—Reagan disappears, just as several young teens recently did before her.

After a girl’s battered body is found and Willie Lee Flynn is charged with the crime, Mickey decides she must learn what became of her daughter. When Willie stonewalls her attempts to get information, she takes legal actions as an amicus curiae (or “friend of the court”) to loosen his tongue, leading to disastrous results. As she unearths increasingly shocking information, Mickey risks her life to find Reagan.

Clary’s fast-paced, well-honed story is sharp from start to finish, save for one trite opening scenario when a teen named Taylor is snatched by a man looking for a lost dog. Characters are physically and emotionally vivid: Mickey is shrilly intense and Willie has surprising depth, while supporting characters are portrayed with effectively distinguishing details. Police chief “Bud” Buchanan, for instance, wears not standard-issue duds but “a solid-black suit, bow tie and a vest that bulged under the strain from his sizable belly.”

The author, himself a trial lawyer, offers standout courtroom scenes and crisp dialogue throughout that transports the action while never dragging it down. Pursuits are intense and plot twists spin out from a tightly wound coil, unraveling startling insights. Editing needs are minor and few.

In short, this work of crime fiction is fine story-telling. Satisfying and entertaining, it is certain to be a crowd-pleaser among fans of the genre.