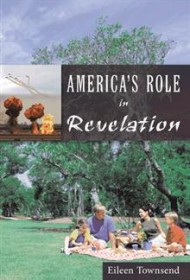 The End Times is a theological belief in the final days of history, a theory derived primarily from Revelation, the last book of the New Testament. Written nearly 2,000 years ago, Revelation obviously contains no mention of the United States. But many writers and thinkers, from Hal Lindsey to Tim LaHaye and Jerry Jenkins, believe the United States plays a pivotal role in a spiritual and physical war between good and evil. In America’s Role in Revelation, author Eileen Townsend picks up that mantle.

In 2009, frustrated with how her nation was behaving as a whole, Townsend went on a four-and-a-half-month liquid fast that included prayer in an effort to receive a new revelation about the future of America. She experienced a vision. “What I have been shown is that America was developed to be a refuge for God’s children, both Christians and Jews, during the end-time struggles,” she writes. But, the country has not lived up to its potential. She continues: “Since we have abandoned the Godly principles established from the foundation of this nation, taken God and prayer out of government places, and banned the teaching about God from our public schools, our nation has fallen quickly.” The solution? For America to put God first in all things.

Townsend has a conversational writing style and her ideas are driven by a yearning to do good. Yet, the book suffers from a lack of cohesion. The book’s first part, an exegesis of Revelation, is meant to set up her thesis, but a lack of focus and transition of ideas between chapters presents a collection of thoughts instead of a clear and driving exposition. This also leads to the book feeling unbalanced, as only the last quarter deals with America’s role in Revelation.

Townsend’s heart is in the right place—she yearns for a country that embraces, not ignores, God—but most readers will be left wanting a more detailed revelation.