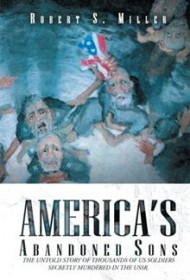 In this extensively researched book, author Robert S. Miller, a former Army Colonel and Defense Intelligence Agency (DIA) analyst, presents his thesis that the US military—with the complicity of its civilian leadership—committed widespread fraud in its accounting of POWs and MIAs during each of the 20th century’s major conflicts: WWII, the Korean Conflict, and the Vietnam War.

The author alleges that America, confronted with a difficult geopolitical equation, issued reports of missing military personnel with deceptively low numbers. American military officials, he claims, neglected to include American soldiers liberated from German POW camps in Eastern Europe and never repatriated and vastly underreported those taken prisoner by the North Koreans and the Viet Cong. Citing numerous sources indicating that many of the detained Americans were imprisoned in the Siberian Gulag, at camps near Odessa and at other locations behind the Iron Curtain (and, in the case of Vietnam War POWs, behind the Bamboo Curtain in camps located in Laos and Cambodia), he goes so far as to suggest some might survive even today.

The author became interested in these questions while working at the DIA on the declassification of Vietnam era records, and he backs up his deep concern for families of long-missing American servicemen with investigative zeal.

On the down side, his assessments of the political situations seem at times overly stark. Referring to POWs detained in North Korea, he states “…there were very few American options [for rescuing these prisoners] available to the US short of starting a nuclear war…with both China and the USSR.” And much information is needlessly repeated throughout the book. The considerable length could easily have been trimmed by reducing many of the details used to “set the stage” before presenting an argument. (For example, almost every time he mentions the Yalta Conference, the author discusses Stalin’s disregard for its agreements before positing his next point.)

The book is also dense with statistical data and minutiae, such as the 58-page Appendix consisting of reproductions of declassified documents, many of which are cited in the notes and don’t need to be physically displayed.

Despite its shortcomings, this book covers what may well be a painful—and underreported—chapter in American history, one deserving of just such a thorough accounting.