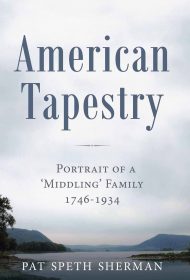 Despite humbly averring, “I am not a professional historian,” Pat Speth Sherman proves herself a skilled chronicler of America’s past in this account of her family’s role in various epochal events.

As Sherman explains, the project began as a short biographical sketch of her great-grandfather John McEliece, a Civil War veteran. However, it soon grew to more ambitious proportions.

Sherman begins in the 1740s, when her ancestor James Woodside emigrated from Northern Ireland to Britain’s North American colonies to work as an indentured servant. James subsequently became a Pennsylvania farmer during the French and Indian War, and Sherman tries to reconstruct, from the scant documentation available, his and his two sons’ service in the American Revolution. James’s tour of duty included, notably, a major American defeat in the 1776 Battle of Long Island, though “whether he panicked and ran at the sight of the Hessian mercenaries’ bayonets or stood firm to fight… we will never know.”

Other family members participated in the fall of Mexico City during the Mexican-American War and in the clean-up of the Gettysburg battlefield, a task “without glory,” requiring the burial of thousands of men and “the carcasses of at least 1,500 horses and mules rotting in the July heat.”

At times, Sherman’s family is overshadowed by the period context she renders in careful detail. However, her writing never becomes dryly recitative, but remains vividly pictorial and even poetic throughout, as when she pictures the “American tapestry” as comprising the “soft greens and rich browns of the soil [and] the steely grays and bloody reds of war.”

Genealogy buffs will especially admire the detective work Sherman performed in excavating her family’s past, but anyone interested in a fresh perspective on American history can profit from her rich work.