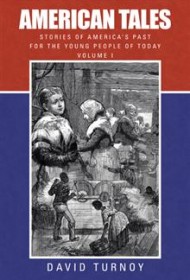 Students in Mr. Bernstein’s afterschool enrichment class get a front-row seat to some of America’s pivotal moments from the days of Columbus through Reconstruction, in this book geared to middle-schoolers.

Mr. “B” isn’t your run-of-the-mill history teacher. When students sit on his magical couch, they are whisked back in time to experience events firsthand. They meet and interact with historical children, such as Macu, a Taino boy who shares his anxiety over Christopher Columbus’ arrival, and Eliza, whose mother runs a boarding house during the Constitutional Convention.

Retired elementary school teacher David Turnoy highlights the less-often heard voices of the past: the oppressed, conquered and defeated. We meet a Cherokee Indian father slogging along the Trail of Tears with his family, a spirited slave boy who risks his life to find freedom, and many others.

Turnoy’s passion for history clearly shows, and his narrative is backed with a strong bibliography. Unfortunately, while the book’s concept is fantastic—think Magic School Bus takes on history— writing flaws hinder it significantly. Instead of using vivid descriptions to engage readers, for example, Turnoy employs flat adjectives. (At one point, he weakly describes a slave mother as “a small but strong black woman.”) Similarly, the intensity of emotions often fails to match the action. After witnessing a grandmother die on the Trail of Tears, we are simply told that “everyone was very sad.”

Dialogue is consistently unnatural as students spout off dates and facts like history professors, and Turnoy attempts to mask long lectures as question-and-answer sessions between the students and Mr. B., which quickly becomes tedious.

Most troublesome, however, is how nonchalantly the characters treat the subject of time traveling. The historical characters’ lack of reaction to it feels especially incredulous.

Though grammatically and mechanically sound, this book requires revision before it can engage Turnoy’s target audience. As is, the narrative falls short of being an entertaining, believable fantasy for kids.