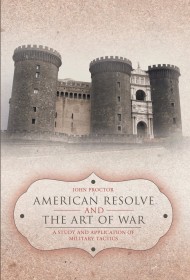 John Proctor, a United States Air Force veteran who served in the Korean War and then in the reserves for more than 25 years, has written a wide-ranging book that looks at how war is fought, won and lost, and seems to be attempting to demonstrate what we can learn from the past to change the future of warfare.

Though American Resolve and the Art of War focuses primarily on World War I and II, Proctor also looks at pre-20th century conflicts, such as the Thirty Years War (1618-1648), and how the Battle of Salamis in 5th century BC between bellicose Greek city states affected combat strategies that we still learn from today.

Proctor’s love of history and his understanding of war throughout the centuries are evident. But except for a short paragraph on the book’s back cover, American Resolve lacks a main thesis, which is like creating a battleship without a rudder. Hence, we never really know the purpose of Proctor’s project and we’re not clear where he’s taking us. A few paragraphs at the start of the book that outlined the material and provided a road map for the journey would serve not only the reader, but the author himself, for although Proctor is a good stylist and his prose is clear and direct, the material needs more cohesion.

There is much to like in Proctor’s book, and his ideas for reducing the size and cost of our current military by bulking up the reserves, his insight into the use of dirigibles for transporting supplies at low altitudes during times of war, and his wake-up call to military commanders to not rely too heavily on technology in the 21st century are provocative.

In sum, there is great potential here, but the book needs major revision to be a truly effective work of military history.