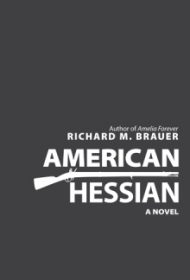 Richard M. Brauer’s engaging war novel, American Hessian, follows a young Prussian farmer forced to become a grenadier on the side of the British in the American Revolution.

The year is 1776, and young farmer Franz Bauer is pressed into the Hessian army, which the local prince lends to the British to help suppress the rebellion in the American colonies. Franz is big, strong, intelligent and peaceful, and his military training comes as a rude shock. Recruits suffer lashes from the “cat-of-nine-tails” for small transgressions, and Senior Sergeant Schistkauf relishes handing out these punishments.

Still, the harsh discipline forges the group into a fighting unit that in time crosses the Atlantic on the Duchess Caroline to quash the unruly rabble in America. The book explores Franz’s many travails, including a horrific ocean crossing, an unfair punishment after a failed mission, and capture by the American forces. Readers might prefer a protagonist with some flaws, but they will wince for Franz as he survives illnesses and the cruelty of the lash. Meanwhile, Schistkauf is the rotten antagonist they’ll love to hate.

The author has researched his subject well, and the narrative doesn’t stint on the ugliness of life in Duchess Caroline’s bowels or in the viciousness of war. This attention to detail makes the book a pleasure to read despite a few minor flaws: The author incorrectly sets White Plains in New Jersey instead of in New York and refers to “Her Majesties” in the possessive sense on several occasions (George III was king then, so it should be “His Majesty’s”). There are also a few typos and, oddly, the author’s query letter to publishers/agents at the back of the book, perhaps from an old draft.

None of these superficial drawbacks would be hard to fix, and such revision would make for a more polished read. Nonetheless, American Hessian provides an intriguing story about the Revolutionary War—one that should satisfy many lovers of historical fiction.