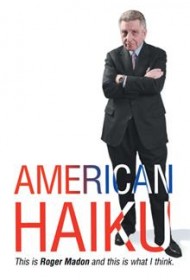 Born in 1936, Roger Madon is a long-time New York City labor lawyer with a wife of 42 years, two children, Peace Corps service, a love for the United States of America and lots of opinions, mostly about politics. He shares those opinions through a blog, radio commentary and, now, a book collecting more than 200 of his radio spots. Many cover one page of the book; some bleed onto a second page. Near the beginning of each commentary is the phrase “This is Roger Madon and this is what I think.” He ends each commentary with the same phrase.

A self-described “conservative,” Madon often sounds unsympathetic to just about anybody who isn’t wealthy, anybody who supports the Democratic Party, or anybody who is Muslim. Occasionally, he strays from political commentary to discuss something intensely personal, such as the death of the family cat Lucky about 10 years earlier. Events have overtaken some of Madon’s commentaries. He must feel sheepish, at the least, to have written that Texas Governor Rick Perry “will be nominated as the Republican candidate to run against President Obama and he will beat him.”

Such predictions aside, what stands out most is his penchant for name-calling. In Madon’s realm, for example, President Barack Obama is “a pinheaded law school professor.” Often, Madon uses the word “socialist” to describe Obama and other objects of scorn, but he lacks an understanding of history or the current meaning of socialism; he misapplies the word on dozens of pages.

Tracking the connections among the commentaries is difficult, because the book is organized alphabetically by title, with “A” and “The” counted as the first word. As a result, “A country at war” is near the beginning, and “The American Muslim” is near the end.

While Madon’s commentary, though generally clear, is too hit-and-run to provide thoughtful reading, these extended sound bites probably work well on radio, where listeners’ concentration is less intense due to multitasking.