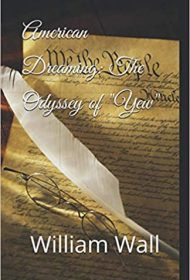 William Wall delivers a scathing indictment of modern capitalism and American values in American Dreaming: The Odyssey of “Yew.”

Our hero is Ulysses “Yew” Wynn, a good-hearted young man struggling to resist the world’s depraved temptations. His cross-country journey acidly dissects our contemporary conflicts: immigration, economic inequality, abortion, and more, and there are plenty of loathsome acts here that hit close to home these days.

The cast contains multitudes, but the evilest is President “Brander” Brand, a Donald Trump-style wannabe authoritarian despot. He’s a megalomaniacal, corrupt fascist who has split the country into factions in his relentless pursuit of power. Control comes by taming his constituents at any cost, including execution.

The conflict begins when Yew’s farm is seized to replace its crops with a bioengineered substitute branded “C-RAP,” a foodstuff that crosses maize with particle board. After Yew’s encounters with his mentor, a reluctant actor turned revolutionary, and a brief stay in a concentration camp, an eccentric power broker named Max convinces him to participate in his new scheme. In Max’s fanciful airship, “The American Dream,” Yew travels the country meeting a variety of oddballs and endlessly debating Max about ethics and American values.

The ambitious novel is structurally and stylistically demanding. Wall employs unbroken blocks of florid, loquacious prose for explication and dialogue, while the story meanders through unrelated incidents that become stranger over time. Yew faces down drug lords in Mexico, barely escapes an organ thief with all his parts intact, and is ultimately tricked by Max into running for president against the fiery Brand.

Fortunately, the oddballs Yew meets are colorful. Besides the garrulous and quarrelsome Max, Yew encounters a kindly mentor in The Professor; a friend in the burly Supersized, and a frenemy in covert operative “Double-O,” virtually a doppelganger for Oliver North.

This is an outlandish, overlong trek, but readers who like writers such as Kurt Vonnegut, Anthony Burgess or Philip K. Dick will likely find amusement here.