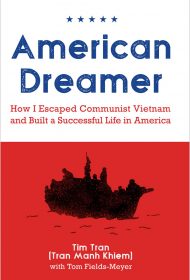 In American Dreamer, a former refugee chronicles his odyssey from communist oppression to freedom and achievement in America.

This harrowing autobiography is inseparable from the war that engulfed Vietnam and scorched America’s psyche. “[Y]ou cannot separate yourself from your past,” the author writes, and his book makes the case with cinematic clarity.

Tran Khiem’s father had clerked for the South Vietnamese government and prodded the youth to apply his unusual intelligence to exceed his classmates. Khiem earned a university scholarship to study in the U.S., conditioned on his agreement to return to Vietnam upon graduation.

In America, he excelled in finance and became fluent in English. Although he loved American culture and made many friends who encouraged him to stay, he kept his word and returned to work for Shell Oil in Saigon until the communist victory in 1975. As life became intolerable, his family encouraged him to escape and try to get the family out later.

The book’s title is most apt: Refugee Tran Khiem became citizen Tim Tran, a highly respected corporate executive with degrees from Pacific University and Berkeley. His wife Thuy made her separate journey to America and later became Cathy Tran.

The story arc in American Dreamer is not one of character—Tran’s essence doesn’t change— but rather of plot. That plot never lags and readers will remain riveted until the triumphant conclusion. Written in brief, easily readable chapters, this is a remarkable story of courage, determination and gratitude—one highly recommended for readers seeking an understanding of the risks refugees take to find freedom.