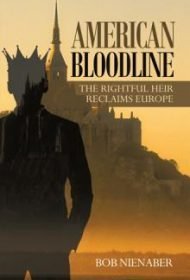 Nienaber’s timeline starts in the Middle East during the 5th century B.C.E. and continues through the twilight of the Roman Empire to the ascension of France’s Charlemagne to William the Conqueror’s victories in England. He incorporates elements from classical mythology and offers insights about the evolution of the modern British monarchy. Nienaber uses this backdrop as origin-story fodder for his protagonist, a seemingly average American named Charlie.

From early on, Charlie has special powers and insights. He has a sixth sense about others’ motivations, thoughts and intentions. He also has unusual physical characteristics, such as webbed feet, and possesses a kind of superhuman strength when threatened.

These traits, it turns out, are the result of a lineage stretching from a lost tribe of Israel through the rise of Western European civilization to the New World colonization and beyond. As Charlie discovers more about his forebears, Nienaber’s narrative tracks his journey of self-discovery from infancy to an adulthood marked by run-ins with enemies from secret government organizations—a quest that ultimately leads to the highest echelons of European government.

Nienaber has clearly done his historical homework. His exploration of the lost tribe of Benjamin, Charlie’s biblical forebears, is detailed and exhaustive. However, he fails to seamlessly integrate the lengthier historical passages with the story of Charlie’s search for his true destiny. These parts tend to ramble and divert attention from present-day characters and conflicts, destroying the narrative’s rhythm. Additionally, when writing about history, the author assumes an editorial voice, offering interpretations on long-disappeared cultures that could easily be disputed.

While Nienaber’s central vision of a hero with powers culled from millennia of human history has promise, the story never realizes its potential. Readers of history would do better seeking primary sources, and fans of historical fiction will likely wish for a story that more seamlessly integrates facts and fantasy.