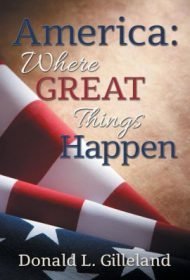 Donald L. Gilleland echoes a concern of many people with America: Where Great Things Happen. The media, he writes, dwell on the negative and largely ignore positive news. His solution is to provide “uplifting stories about wonderful things that occur every day in our great country, things you rarely read about, things that make you smile and feel proud to be an American.”

In the first eight chapters, Gilleland offers profiles of more than 80 inspiring people. Some subjects are well known, such as chess champion Bobby Fischer and physicist Albert Einstein, but the vast majority will be unfamiliar to most readers. An example is Dr. Paul Spangler, chief of surgery at a Pearl Harbor naval hospital when the base was bombed in 1941. After leaving the service, he became chief medical officer on the hospital ship SS Hope and later chief surgeon at a California prison. When he was 67, he took up distance running; at age 90, he ran in the New York Marathon.

Gilleland also cites organizations and corporations that contribute to society out of the spotlight.

Through those chapters, Gilleland does a creditable job of describing unsung heroes. But unfortunately, he then devotes a long chapter to conservative hot-button issues: the so-called assault on Christmas, importance of a pro-religion national agenda, wastefulness of school busing and lunch programs and the need for English to be declared America’s national language. What had been an uplifting, feel-good book takes a right turn and suddenly feels like a Republican Party monograph.

Tighter editing and de-politicizing would make America more cohesive and enjoyable. Even so, those who can overlook the political agenda will find interesting information on inspiring people worth learning about.