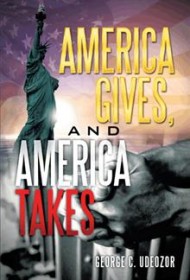 George C. Udeozor is a Nigerian-born U.S. citizen who spent nearly a decade in custody on charges he and his wife held a teenage Nigerian girl in involuntary servitude in the U.S. for five years. In 2008, Udeozor pled guilty in the case, which also included charges of physical and sexual abuse (his wife was found guilty in a separate trial). He was sentenced to 97 months in prison.

In America Gives, he details an ordeal that began when he was taken into custody in Nigeria in 2004 at the behest of U.S. officials. Readers follow him through foul and dangerous prison conditions and an equally perilous trip through the Nigerian and U.S. legal systems that ended with his guilty plea.

Udeozor blames his plight on several factors: a disconnect between Nigerian cultural traditions and U.S. law, his wife’s opportunistic and greedy family, his teenage accuser’s desire to remain in the U.S., nebulous forces of evil, corruption and malfeasance in government, the courts and penal systems here and abroad. But he also consistently blames himself for his situation.

America Gives would have benefitted from tighter and more consistent editing. From time to time, the author struggles with idiomatic English. During one prison transfer, he had “my mouth in my throat.” Speaking of U.S. marshals, he writes that their job was to make sure all the “tees” were crossed and “eyes” dotted. Also, some chapters have numerous typos – even the author’s first name is misspelled at one point.

A stronger edit also would have given a long book a tighter focus. Udeozor’s case is interesting, but his writing tends to wander into extraneous ruminations and repetition as he tries to justify his behavior.

Whether he was a victim, as he claims, or a criminal, as the U.S. government says – readers can judge for themselves – America Gives does offer a different view of the justice system that might interest those who can overlook the difficult prose.