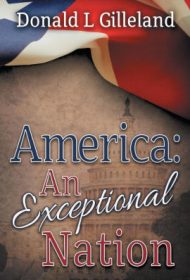 Donald L. Gilleland sets out in his book to explain how America is an “extraordinarily exceptional nation” and one of a handful “that can offer real hope for our world in the 21st century.”

Gilleland’s well researched catalog of America’s strengths includes opportunity, diversity, world leadership, the Constitution, agricultural productivity, military strength and generosity. Why else, he asks, would so many people want to immigrate here? Yet this is no blindly nationalistic essay. Along with the good, he examines the ballooning national debt, national security issues and the “rapidly changing political landscape.”

Some readers might presume that the latter is a reference to the tumultuous and ugly discord in the era of President Donald Trump. It’s not. America, copyrighted in 2015, is a response to former President Barack Obama’s dismissal of American Exceptionalism. The four-year gap makes some of the statistics and argumentation outdated, yet the book remains relevant.

More troubling, though, are the writing and editing failings. Occasionally, the author wanders from his central theme, distracting readers with minutiae. While some statistics are enlightening—for example, America’s religious institutions donate to developing nations more than all private sources of 30 industrialized democracies similarly donate—others slow down the narrative. Too much time is sometimes devoted to the obvious, such as a lengthy, unnecessary discussion about the U.S-Canadian border.

Proofreading also falls short. Examples include “grocery stories” (grocery stores), “one million American live” and “her” (here). Sporadic wordiness will make some readers yearn for a skilled editor, as will repetition. For example, in his Preface, the author quotes Jeb Bush, Chris Christie, Ted Cruz, Newt Gingrich, Bobby Jindal, Rick Perry, Mitt Romney and Hillary Clinton as they each affirm American Exceptionalism; choosing one or two of the best quotes would have made the point sufficiently.

Despite such issues, readers will find interesting nuggets here and there as America continues the debate over the hot issue of America’s Exceptionalism.