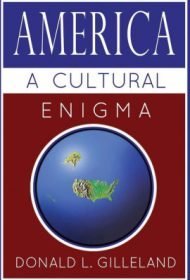 The past half-century has seen major cultural change in the United States, from the greater empowerment of women, to globalization. In this book, Donald Gilleland presents his views on the cultural transformation he has observed between 1963 and 2013.

Gilleland composes his book in short chapters, each a stand-alone essay on a social or political topic. He discusses demographic changes in the U.S., such as the shrinkage in family size, people marrying later in life or not at all, and the increasing numbers of Hispanic and Muslim Americans. He takes on controversial social issues such as abortion, racism, gay rights, and capital punishment. He discusses the role of the U.S. military, and the growth of technology.

Although Gilleland adopts a moderate tone, many of his views are far from balanced. He minimizes the importance of slavery in U.S. history, proffers the trope of “creeping sharia,” and suggests a connection between homosexuality and pedophilia. His use of the archaic term “mulatto” to describe President Obama will give readers an indication of his perspective.

The book contains many numbers, facts and figures, but they are sometimes misleading. For example, on page 15 (footnote 7), Gilleland cites FactCheck.org as a source for a quotation that supposedly supports his views on the costs of illegal immigration. Not only does the cited article not contain the quotation in question, but it refutes much of what Gilleland alleges on the topic. Further, he sometimes cites statistics without distinguishing between legal and illegal immigrants.

Published in 2014, two years before the most recent presidential election, this book provides a window into the concerns of those who voted for President Trump. However, many of its arguments rely on conservative media talking points (e.g. “war on Christmas”) rather than original arguments or analyses.

Nonetheless, this book could interest consumers of right-leaning media, or those who wish to understand them better.