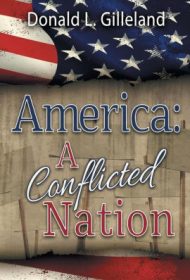 In this collection of essays written over 30 years, Donald L. Gilleland, a veteran and former director of public affairs at General Dynamics, blends topical references to mainstream media with facts and opinions in the style of a syndicated newspaper columnist.

The book’s title nods to the national debate raging on many issues, and the sum of his writing reveals Gilleland is conflicted, too. An evangelical Christian, he is certain God has singled out the United States for greatness and is confident in America’s moral authority. But he also warns we are becoming a selfish and egocentric society, adrift with no sense of direction, with our traditional family structure and respect for authority disintegrating. He lectures about our addiction to petroleum and spending and our epidemic of road rage.

The articles are grouped loosely by topic, but without dates, chronological organization or any indication of where they were published, they often lack context and can be confusing (e.g., who remembers the sequestration drama in 2013?). He has favorite themes, such as the foolishness of cutting defense spending, and sometimes repeats himself across essays, such as, “even a cursory look at the human anatomy will suggest that homosexuality was not the designed intent.”

The author calls himself a fair-minded Independent. Indeed, his opinions fall on both sides of the political aisle. For example, he is against gay marriage, supports campaign finance reform and found then-candidate Donald Trump’s proposal to ban Muslims from entering the country “bizarre to say the least.” At his best, he stimulates thought and discussion. More often, though, his essays—which lack citations for his sources and sometimes make bold assertions without naming any source at all—are a platform to wax nostalgic.

Gilleland is writing for his elderly peers, he acknowledges, and they may take comfort in his confident prose. But those who don’t already agree with him are unlikely to be swayed by these essays.