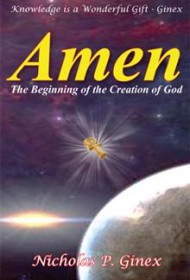 For the big three religions, Judaism, Christianity and Islam, the word “amen” (meaning, “so be it”) is the great affirmative, a holy “yes” if you will, that concludes moments of prayer and serves as an imprimatur at the conclusion of rituals or sacred ceremonies. Yet, in his book Amen: The Beginning of the Creation of God, retired electrical engineer Nicholas P. Ginex argues that “amen” refers to something else in these faiths, most notably, the Egyptian god, Amen (more often written in Western society as Amun or Amon).

“Many followers of the Judaic, Christian, and Islamic religions have not been informed that Amen was worshipped as the greatest Egyptian God two thousand years before the birth of Jesus Christ,” Ginex writes. He goes on to explain that “Christian leaders have misled, misconstrued, and misinterpreted Amen as being Jesus Christ” when, in fact, it was Jesus who acknowledges Amen as God of the universe in Revelation 3:14. “These things saith the Amen, the faithful and true witness, the beginning of the creation of God.”

An eccentric thesis like this could very well be dismissed as just clever word play, but over the course of 250-plus pages, Ginex provides historical insight into the god Amen and such texts as The Egyptian Book of the Dead. Moreover, he traces the use of amen in Jewish, Christian and Islamic scripture and how the religion of the Pharaohs may have influenced the way these faiths understood their relationship with God.

Overall, Ginex lays out his arguments in a methodical manner, though a seasoned editor would have tightened up the prose and corrected grammatical errors throughout. However, while his ideas are attention grabbing, he provides little evidence by scholars to back up his thesis. Without this material, few will be convinced of what most mainstream theologians and scholars would consider outlandish, albeit sometimes fascinating, theories. In the end, he delivers only an exercise in speculation.