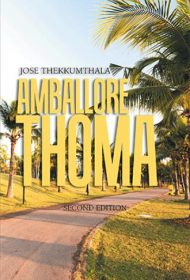 Set largely in Amballore, a small town “nestled along the southwest border of the Indian subcontinent and overlooking the Arabian Sea,” the story begins in 1939 when Thoma and Ann marry. Thoma’s rice-trading business is successful, and he buys a large plot of land to build his dream home. Although he generously lifts his extended family out of poverty, greedy siblings find a way to legally steal the land, leaving Thoma and his family destitute.

Forced to live in a cramped rental property in another town, he finds sporadic work as a day laborer, begins drinking heavily, and starts beating his wife—all while adding more children to his growing family. As the years pass and his children mature—and Thoma and Ann grow old—their dysfunctional family confronts some bizarre problems, and a few familiar ones that Thoma can’t seem to escape.

The novel’s strength is also its weakness: the sheer uniqueness of the story makes it a fascinating read, but the audacious fusion of disparate genre elements may turn off potential readers seeking a more familiar read. That said, the blending of mythologies—one of Thoma and Ann’s offspring is a werewolf while another is the eight-armed Hindu goddess Bhadrakali incarnated—make for an unpredictable and, at times, whimsical, read.

Additionally, the author’s focus on rich description throughout, especially the cultural elements of Indian life, deepen the narrative and create an immersive reading experience: “She wears [sic] gray sari and a brass ring is hanging from her lower lip… She smokes beedi and puffs out the smoke rings towards the bullocks.”

Fiction fans who enjoy unusual reads will find this unique work—replete with werewolves, ghosts, and genies—as strange as it is charming. Think of it as Neil Gaiman meets Arundhati Roy.