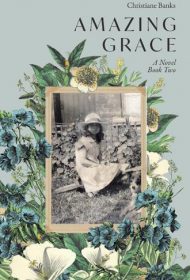 Christiane Banks’ Amazing Grace, a follow-up to Amelia’s Prayer, could be summed up by the adage: terrible things happen to good people.

Banks’ second novel reacquaints readers with the Lavalle family as they move on from the death of Amelia, beloved mother and wife. The opening chapters seem to indicate the story will follow each family member equally, but it actually centers on Abby, a Lavalle daughter struggling with a passionate love for the wrong man. As Abby processes her feelings for Father Gabriel, a Catholic priest, she meets two other men, Byron and Andrew, who may offer different courses towards happiness.

Amazing Grace echoes Maeve Binchy’s cozy novels in its chronicling of normal people’s lives and The Thorn Birds for its a tale of forbidden love, but the narrative struggles to provide emotional satisfaction. Various challenges (abortion, cancer, death) are related in the same tone as triumphs (love found, marriage, happiness rediscovered), and the novel falters for want of nuance. It also lacks historical context, offering few period details.

The novel’s emphasis on telling versus showing impedes the reader’s ability to sympathize with the characters, as does the dialogue, which often feels unnatural. (After seeing his old home, one character opines in overwrought language: “A thousand memories tumbled past my eyes like a film. I could see the lazy summer days…with the trellis almost falling over from the weight of roses cascading to the ground in every color of the rainbow and the perfume floating through the air as we played.…”)

Additionally, character development is weak. Abby’s core character is the same at the conclusion as in the beginning, and readers might wonder what she gained from her experiences. It’s also unclear how and why she makes the final choice she does.

Despite it all, and as the title suggests, grace exists in even the darkest times. For some, that message may be reassuring enough to counterbalance the novel’s stylistic challenges.