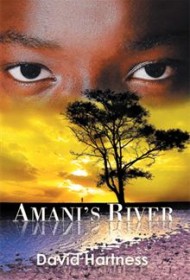 Amani’s River offers relentless accounts of murder, torture and sadism that make these pages indelible and, at the same time, hard to stomach.

At the age of ten, Aderito has been uprooted, along with his mother, from their home in Houston to accompany Aderito’s father as he returns to his homeland of Mozambique to serve as what seems to be a medical missionary. Thrust into a strange land and forced to learn a new language, the boy’s loneliness is eased by his friendship with Victoria, a girl of about his own age, with whom he soon forms a tight bond. Unfortunately for them, Mozambique is in the midst of a ruthless civil war, which soon sweeps them up, turning Aderito into a vicious child soldier and Victoria into a sex slave.

From here, the ferociousness is unrelieved. Numbed by heroin, driven by fear, forced into cannibalism, the young man is turned into a killer, ravaging enemies with both AK47 and machete. “I hated the monster inside of me,” he declares at one point, and yet eventually he begins to thrive on his imagined power.

After numerous scenes of savagery, the story comes to a head when Victoria has a child by one of her tormentors and futilely tries to escape, while the slaughter around her and Aderito intensifies. By story’s end, no one has gotten out of the narrative unscathed.

The prose is sometimes awkward in this tale (eg: “My thoughts pondered everywhere”), and the novel features occasionally puzzling plot twists, as when Aderito’s, who willingly used others to his own ends in Houston, unhesitantly sacrifices himself for others in Mozambique.

Despite any drawbacks it may have in style or characterization, however, this novel offers a vivid portrait of what happens to children thrust into combat. In a world filled with reports of young boys wearing suicide vests and of kidnapped young girls sold into slavery, Amani’s River is an instructive, if brutalizing, read.