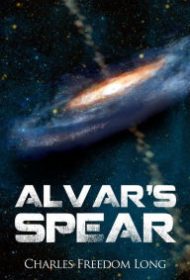 Alvar’s Spear is a sequel of sorts to Long’s 2015’s Dancing with the Dead, although it’s a standalone novel in its own right. Set largely on the moon world of Alvar, the novel revolves around Gar, a geneticist who is half Terran and half Antal (a giant bipedal cat-like race). Gar is tasked with locating a genetic mutation that has played an integral role in bringing the Antal people to the brink of annihilation. But the mutation is only one piece of a grand puzzle-like conspiracy that, if successful, could enslave an entire race and turn the majestic realm of Alvar into a swampy wasteland ruled by insectoid conquerors.

To complicate matters, Gar has falsely manipulated a beautiful Terran geneticist into helping him—but once she arrives on Alvar and into the middle of a looming civil war, Gar realizes that he has not only put her life in danger but pulled an unconnected race into the conflict as well.

Similar thematically to Ursula K. Le Guin’s seminal novella The Word for World is Forest (1972), the story is undoubtedly a powerful read. Ideas explored include prejudice, acceptance and unity, but ultimately, the questions asked are deeply spiritual in nature.

Minor criticisms include a romantic plot thread that seems forced and doesn’t fit organically with the flow of the story and a conclusion that has some contrived elements. That said: this is a solid science fiction offering. The philosophical undertone  (quotes from Nietzsche, Cicero, Sun Tzu, Sitting Bull, Malcolm X, Sartre, etc. serve as chapter headers) adds a deeply contemplative layer to the narrative tapestry.

Readers who are looking for neo-retro science fiction—especially those who enjoyed Le Guin’s early works—will find this novel both entertaining and enlightening.